Homepage UI:
VeraMate has gone through a complete rewrite of the UI layout. You now have a lot more control on the VeraMate homepage (not device view).

Miscellaneous:
Additionally, multiple enhancements have been made, including:

Introducing the availability of VeraMate for Apple Watch as a new in-app purchase.

Also, many miscellaneous changes, including: 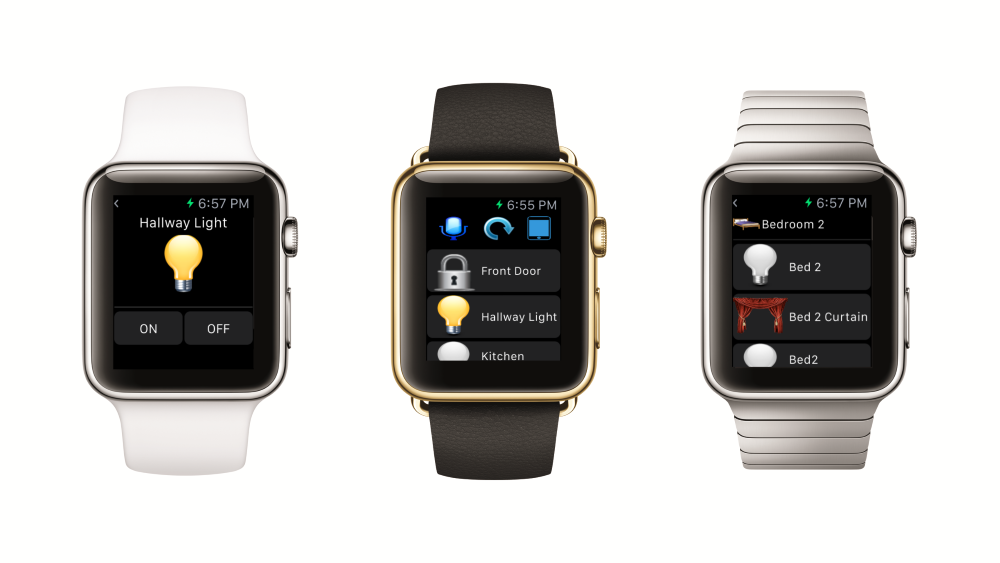 Major changes have been made to iBeacon handling to improve responsiveness. Customized polling is now available via the settings menu. To prevent battery depletion, this defaults to 10 seconds - raise or lower depending on your requirements.

Just in time for a new year present !

A major enhancement has been done to the geofencing to minimise battery usage, and allow better detection. This will decrease the amount of battery usage, but reports have shown it still uses more then we want. Another patch is about to go to Apple which further decreases battery usage. ** Please note, turning on WiFi will increase accuracy.

Voice commands may have had a low detection rate as the accent was set to be "British". This will default to "American", and can be changed in the main settings to either British, Australian, American, or Indian accents.

BUG: A small number of users were affected by invalid login credentials after previous upgrades, which prevented the credentials persisting.

Voice control has been re-activated.

Voice Control ! It's here. Currently only supporting English, but speak your command to have VeraMate carry out your wish. ** In appreciation for our users support, Voice Control is currently available for free (limited for Free Edition). Although unlikely, it may require an in-app purchase to use in the future due to server processing costs. **

iBeacons! Indoor sensing at it's coolest. Activate your devices as you walk through you home. More support and features will be coming in future versions. This is currently in BETA - we will be collecting feedback to better enhance support for upcoming updates.

Too many fixes/features to list here, but a couple of main ones:

This release is predominantly a bug/stability fix. Multiple changes to further handle the new MMS authentication servers and improve connection handling. There are also some GoeFence tweaking to attempt to improve accuracy for certain situations only, and double the maximum fence size.

Icon customization changes which disappeared will be retrieved (due to the path becoming invalid with an upgrade). New customizations will stop disappearing with upgrades in the future. Again, apologies to users this affected.

Emergency update to fix the UI6 connection and UI issues which occurred after the Vera server upgrades. VeraMate will make every attempt to support UI6, but please be aware that UI6 is BETA firmware, and do not recommend upgrading to it (as these unannounced changes by Vera testify).

Major update to VeraMate. The changes all centre around being able to change the icon for each individual device. Enter edit mode (by holding down a button), and enter the new setup screen for any device to change icons for the different states. Eg, use a different icon for ON/OFF states.

VeraMate 6 also introduces the ability for 3rd party icon packages. There are currently 4 community packages which are available to download inside VeraMate (these are not part of VeraMate, and have been made available by users). Get in touch if you would like to contribute your own icon package.

Among the many other changes:

Even more anchor abilities for your favorites.

This release includes fairly large UI changes. Some under the cover, some visible. I'm quite excited by this release as includes a lot of cool stuff.
Checkout our facebook page to see an example of the new anchored buttons: http://www.facebook.com/VeraMateApp

There are a couple of known issues

The roadmap for version 5 is to make the UI even neater and slicker. This will include work to enhance the new 5.0 UI components, and more work on device buttons to not only allow image customization per device, but enhance animation and the general feel of the UI. The iPad version will also undergo more of a major rework on some of the UI.